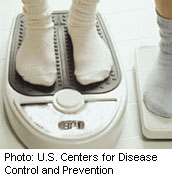 New research finds that parents of overweight kids are more likely to restrict their children’s food intake — a potentially bad idea — if they themselves are carrying extra pounds.

By contrast, mothers and fathers are more likely to pressure their kids to eat more when both parents and children are normal weight.

Neither pushing food nor restricting it is a good idea, said study author Jerica Berge, an associate professor of family medicine and community health at the University of Minnesota Medical School in Minneapolis.

“Prior research has shown that they may have unintended effects such as a child becoming overweight or obese, or engaging in eating behaviors such as bingeing or purging,” she said. Childhood obesity is also linked to a number of health problems, including type 2 diabetes and heart disease.

Berge said the findings can help health care providers look at parents and their kids together and figure out who, based on their weights, may be at highest risk for poor eating habits.

Laura Hubbs-Tait, a human development professor and parenting specialist at Oklahoma State University in Stillwater, said the study is valid and useful. However, she noted, it doesn’t prove that parents act in certain ways — pressuring their kids about food or not — because of how much the parents or the kids weigh. More research is needed to confirm that, she said.

Whatever the case, parents who put pressure on their kids to eat more or less food risk raising children who can’t figure out on their own how much to eat. “Many parents may not be aware that their efforts to control their children’s eating harm their children’s ability to regulate their eating on their own,” she said.

Instead of pushing or withholding food, what should parents do?

“It is more helpful for parents to make sure there are a variety of healthy options in the home or on the table for children to eat, and then allow the child to decide how much they eat,” Berge said. “It is also important to continue offering food because it can take numerous exposures to a food before a child will eat it.”

Parents who are worried about a child’s food intake should talk to a physician, she said.

Hubbs-Tait offered these suggestions: “Parents should be helping children learn how to regulate their own eating, helping them learn to make good food and physical activity choices, and providing lots of encouragement and support when they do so.”

The study was published online Aug. 24 in the journal Pediatrics.