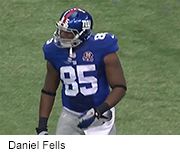 Infectious diseases doctors say they’re puzzled by a serious MRSA infection that could cost a professional football player his foot.

The case of New York Giants tight end Daniel Fells is unusual for several reasons, the experts say. First, because infection rates for the so-called “superbug” are falling in the United States. And second, the 6-foot, 4-inch 260-pound Fells is far from the type of patient who’s likely to develop a MRSA infection so serious that amputation may be required.

“In a healthy young athlete, to have an amputation from MRSA is extremely unusual,” said Dr. Aaron Glatt, a spokesman for the Infectious Diseases Society of America.

Fells, 32, appeared to develop his infection after he received a cortisone shot last month to treat a toe and ankle injury, according to the National Football League.

A week later, on Oct. 2, he appeared in an emergency room with a 104-degree temperature. Doctors determined that he had a MRSA infection in his ankle.

Fells has since undergone five surgeries to fight off the infection, and there’s concern that the bacteria might have spread to his bone and bloodstream, prompting the potential need for the foot amputation.

The Giants, meanwhile, have taken the precaution of scrubbing down their locker room, training room and meeting rooms, according to the team.

MRSA, or methicillin-resistant staphylococcus aureus, is a strain of bacteria that has developed a resistance to several common antibiotics.

Typically, MRSA causes a simple skin infection that’s easily treated by lancing the abscess or taking alternative antibiotics. But, if it reaches the deep tissue, bone or bloodstream it can cause severe illness, said Dr. Pritish Tosh, an infectious diseases doctor with the Mayo Clinic in Rochester, Minn.

“Very few of these cases turn into these very serious limb- or life-threatening infections,” Tosh said. “But when they do, it’s very debilitating.”

MRSA was one of the first antibiotic-resistant “superbugs” to be identified and publicized. But effective responses by hospitals have significantly reduced the number of infections in recent years, according to the U.S. Centers for Disease Control and Prevention.

Invasive MRSA infections in hospitals declined 54 percent between 2005 and 2011, with 30,800 fewer severe infections and 9,000 fewer deaths in hospital patients, the CDC reported.

Fells’ occupation may have placed him at greater risk for exposure to MRSA, health experts said.

An NFL physicians survey conducted in 2013 — the year in which the Tampa Bay Buccaneers suffered a three-player MRSA outbreak — found that 33 players had contracted a MRSA infection between 2006 and 2008, according to USA Today.

Fells “is in the high-risk population of athletes, where they share towels and benches and have high body contact,” said Stefan Juretschko, director of infectious diseases diagnostics for North Shore-LIJ Health System in Lake Success, N.Y.

Other NFL teams have suffered MRSA outbreaks in recent years, according to published reports — the Cleveland Browns, the Washington Redskins and the Buccaneers.

One of the Buccaneers players, kicker Lawrence Tynes, sued the team for $20 million in April, alleging that unsanitary conditions in the team’s facilities caused him to contract his career-ending case of MRSA.

NFL players tend to play while injured and get regular painkilling injections, both of which can increase a person’s risk of MRSA infection, Glatt said.

Injections into a joint are of particular concern. Back in 2012, the CDC noted two separate outbreaks of MRSA related to joint injections performed at clinics in Arizona and Delaware, sickening a total 10 patients.

In both clinics, the infections appeared to spread because doctors were injecting multiple patients from vials only meant to be used once, spreading MRSA bacteria with every new shot, the CDC reported.

Although MRSA seems to be better controlled these days, the threat posed by other antibiotic-resistant germs remains high, the experts said.

Juretschko pointed in particular to CRE, or Carbapenem-resistant Enterobacteriaceae, a “superbug” that the CDC this month said has gained a foothold in at least seven U.S. metropolitan areas.

“There are many more drug-resistant organisms out there that can do a lot more harm than MRSA,” Juretschko said.

People concerned about exposure to antibiotic-resistant bugs should focus on good hygiene, by regularly washing their hands and making sure they thoroughly clean and disinfect any cuts or wounds, Glatt said.

If you’re worried that you have an infection, seek medical care as soon as possible, Juretschko added.

“The speed of diagnosis and the speed of identification of the organism is important,” he said. “The longer you wait, the more difficult it is to treat.”

For more on MRSA, visit the U.S. National Institutes of Health.