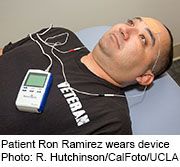 Can a small electrical patch that jolts the brain while patients sleep offer significant relief from the debilitating effects of post-traumatic stress disorder (PTSD)?

In May 2006, machine gunner Ramirez was seriously injured when a roadside bomb exploded during a tour of duty.

“About a year later they figured out that I had a brain injury,” recalled the 38-year-old Gardena, Calif. resident. And like many veterans of war, that injury was further compounded by a diagnosis of PTSD, a condition typically triggered by exposure to traumatic or threatening situations that provoke extreme fear.

PTSD brought on a significant shift in Ramirez’ mood, thoughts and behavior, he said, resulting in a shattered quality of life.

“I had no motivation,” he said. “I had constant nightmares, and I couldn’t sleep. And I would get very irritated by other people, getting into altercations, sometimes even with other patients. I couldn’t even take my two daughters out on my own without an escort.”

Both before and after his release from the hospital in 2009, Ramirez was offered all the standard interventions available for PTSD patients, including a “trial-and-error” array of prescription drugs, behavioral therapy, PTSD counseling and anger management sessions.

But the result was little improvement. “It just wasn’t really blending very well,” he said. “In all honesty, I felt useless.”

“TNS is a new approach to PTSD,” said senior study author Dr. Andrew Leuchter. He is director of the neuromodulation division in the Semel Institute for Neuroscience and Human Behavior at UCLA’s David Geffen School of Medicine in Los Angeles.

“The challenge,” he said, “is that despite offering the best treatments that we can, most PTSD patients are left, sometimes for decades, with significant residual symptoms, like anxiety, irritability, explosive outbursts and sleep difficulty, not to mention depression.”

“But with TNS we approach the brain by thinking of it as a large network,” Leuchter said. “And like any electrical network it’s sensitive to any energy that gets put into it. So, with TNS we pulse the brain with an external source of energy through the trigeminal nerve,” a nerve tasked with transmitting sensations between the face and brain.

“The hope,” said Leuchter, “is that by doing this we can reset the brain network, and offer difficult-to-treat patients some relief.”

The UCLA team that developed TNS set out to address the unmet needs of the roughly 3.5 percent of Americans who struggle with PTSD, including survivors of rape, car accidents, domestic abuse and other traumas. That figure rises to 17 percent of active veterans, and as many as 30 percent of vets who served in Iraq or Afghanistan, according to background information from the study.

The treatment relies on a 9-volt battery that powers a low-level current that zaps the brain through an external forehead patch worn during sleep, according to the researchers. The current targets the patient’s autonomic nervous system and brain regions that regulate mood, behavior and thought.

The Jan. 28 issue of Neuromodulation: Technology at the Neural Interface outlines the findings of a pilot study funded by Los Angeles-based Neurosigma, Inc., which is licensing the technology.

Eight hours a night for eight weeks, 12 civilian patients with both PTSD and “major depressive disorder” underwent TNS treatment while continuing routine therapies. Participants were between the ages of 18 and 75.

“Patients reported mood improvement,” Leuchter said. “And much better sleep, less anxiety and a decreased startle response,” a reflexive defensive reaction to perceived threats. On average, PTSD symptoms appeared to drop by more than 30 percent, while depression severity fell by more than 50 percent, according to the researchers.

Side effects appeared limited to skin irritation at the patch site, the researchers said.

A follow-up trial, now underway, is slated to take another two to three years, and will ultimately involve 74 veterans with PTSD. But Ramirez has already completed his eight-week run.

“The first two weeks were the hardest, because it was annoying,” he acknowledged. “It would shock you with a really sharp electrical impulse if you turned a certain way. But eventually I saw that I was a lot calmer. And my sleep was the best I had had in years. It took away my nightmares. I was more motivated. Usually I would lay in bed, and never leave the house. This rejuvenated me.

“And even after the eighth week, when we were done, it seemed to keep working,” Ramirez added. “I do get irritated some times, but not as bad as before. Now I can go out on my own.”

Dr. Jeffrey Deitz is an assistant professor of psychiatry at Quinnipiac University’s Frank Netter School of Medicine in Hamden, Conn., and a supervising psychiatrist at Mount Sinai Beth Israel Medical Center in New York City. He described the new effort as “a very significant piece of work.”

“This represents a whole paradigm shift in psychiatric treatment,” he said. “The notion that disorders are all about biochemical imbalances in the brain, around since the ’60’s, is giving way to thinking about psychiatric issues in terms of brain circuitry that’s overstimulated or under-stimulated.

“So this is very early in the process,” said Deitz. “But it’s also very exciting. And makes perfect sense.”

There’s more on PTSD at the U.S. Department of Veteran Affairs.