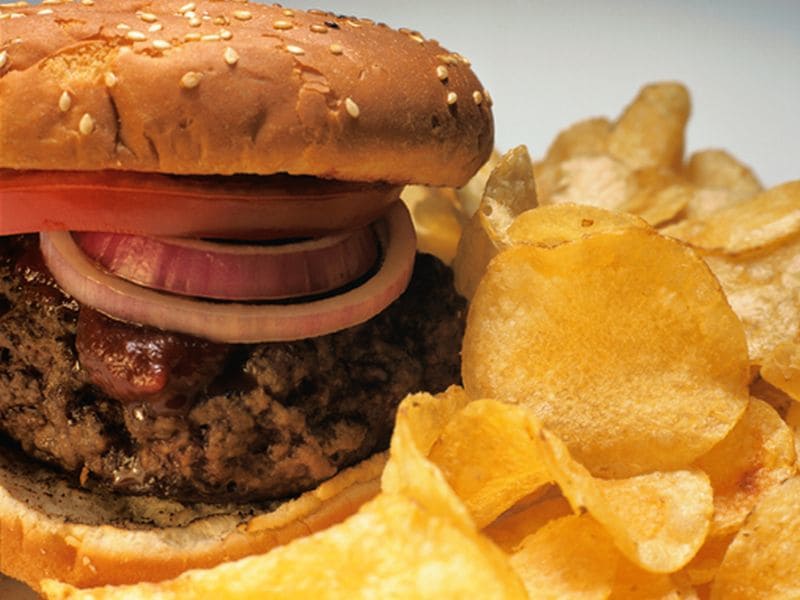 Americans’ love affair with fast food continues, with 1 in every 3 adults chowing down on the fare on any given day.

That’s the finding from a new report from the U.S. Centers for Disease Control and Prevention. When asked by researchers, 37 percent of adults said they’d eaten fast food at least once over the past 24 hours.

There was one surprise: Bucking the notion that poorer Americans favor fast food the most, the report found that intake actually rose with income.

For example, while about 32 percent of lower-income folks ate fast food daily, more than 36 percent of middle-income consumers had fast food on a given day, as did 42 percent of those with higher incomes, the report found.

Whatever your income bracket, fast food probably isn’t doing your health any favors. That’s because it “has been associated with increased intake of calories, fat and sodium,” the CDC team said.

All that adds up to widening waistlines and hardening arteries, one nutritionist warned.

“Most fast food is not good for our bodies,” said Liz Weinandy, a registered dietitian at Ohio State University’s Wexner Medical Center.

“The more of it we eat, the more likely we are to be overweight or obese and have increased risk for several diseases like type 2 diabetes, heart disease and metabolic syndrome when talking to patients,” she said.

Too often, though, Americans ignore the danger.

“When we see news clips of a shark swimming near a beach, it scares us into not going near that beach,” Weinandy said. But “what we should be scared of is double cheeseburgers, french fries and large amounts of sugary beverages.”

The new report was led by Cheryl Fryar of the CDC’s National Center for Health Statistics. Her team tracked data from in-person government surveys conducted with thousands of U.S. adults between 2013 and 2016. People were asked to recall what they’d eaten in the past 24 hours.

Blacks were more likely to have eaten fast food on a given day than whites (roughly 42 percent vs. 38 percent, respectively), while 35.5 percent of Hispanics and 31 percent of Asian-Americans did so. Men tended to eat more fast food than women, Fryar’s group said.

Black men were the most avid consumers of fast food — almost 42 percent had eaten the fare over the past day, the report found.

Melanie Boehmer is a registered dietitian at Lenox Hill Hospital in New York City. Reading over the report, she said, “On any given day, over one-third of Americans consume fast food — that’s a lot of Big Macs and pizza.”

“These findings remind us that fast food companies have figured out a way to conveniently fit into our daily routine, despite their [products’] negative health implications,” Boehmer said.

She believes that policymakers, doctors and health food advocates need to “beat fast food companies at their own game” in order to turn things around.

“If we can offer healthier options that are just as convenient and just as affordable and just as delicious, then it’s a win for everybody,” Boehmer said.

Weinandy agreed that America has to wean itself off its fast food habit.

“There is no reason to completely avoid fast food, but it shouldn’t be consumed regularly,” she said. “You may want to ask yourself how often you’re currently eating it and then cut that number in half if it’s more than once a week.”

The new report was published Oct. 3 as an National Center for Health Statistics Data Brief.

Find out more about healthy eating at the American Heart Association.