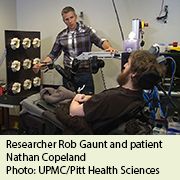 Picking up a delicate piece of cake is very different from picking up a sturdy box of cake mix. And that owes to your sense of touch — you know from touching each that one is much more fragile than the other.

This has been one of the great hurdles to creating a realistically functioning prosthetic arm, but it’s a challenge that researchers in Pittsburgh are starting to overcome.

“I can feel just about every finger — it’s a really weird sensation,” patient Nathan Copeland said about a month after the surgery that implanted the chips. “Sometimes it feels electrical and sometimes it’s pressure, but for the most part, I can tell most of the fingers with definite precision. It feels like my fingers are getting touched or pushed.”

At this time, Copeland can feel pressure and distinguish its intensity to some extent, but cannot identify whether a substance is hot or cold, the researchers said.

Copeland was left paralyzed from the upper chest down at age 18 following a car accident that snapped his neck and injured his spinal cord in the winter of 2004.

In 2014, doctors implanted two chips in Copeland’s motor cortex, the part of the brain that controls arm movement, and two more in his somatosensory cortex, a region involved in processing touch information from the hand, said senior researcher Robert Gaunt. He is an assistant professor with the University of Pittsburgh School of Medicine.

Before the surgery, doctors used imaging techniques to identify the exact regions in Copeland’s brain that corresponded to the sense of touch in each of his fingers and his palm.

When the chips are electrically stimulated, Copeland can feel people touching his real right hand. He can feel sensations like warmth and pressure along the base of the four fingers, and nine times out of 10 can perceive things like a cotton swab pressed on the surface of the skin in a way described as “possibly natural.”

In addition, connectors extending from Copeland’s head can be attached to a robot arm. When attached, Copeland can both move the arm using his mind and also feel when the robot fingers are being touched, Gaunt said.

“We’ve provided him with at least a component of touch. When the robot hand touches an object, he can feel it,” Gaunt said. “He can reach out and grab objects and pick them up and move them around.”

Researchers found that Copeland could correctly identify 84 percent of the time which individual prosthetic finger was being touched while blindfolded.

This achievement is complex and important because these researchers have been able to dial in the specific amount of electrical stimulation needed to provoke a realistic sense of touch, said Dr. Vineeta Singh. She is a professor of neurology at the University of California, San Francisco School of Medicine.

Too much stimulation and the patient might feel pain, tingling or a “pins-and-needles” sensation, Singh said. Too little, and there would be no feeling at all.

The next step will be to further refine the stimulation, said Singh, a fellow of the American Academy of Neurology.

“We’re talking about refining it for the individual to perceive the sensation as it is perceived normally, which is not feeling the mechanical sensation of stimulation but at a deeper level how touch is perceived,” Singh said.

“You would want them to be able to feel an object and tell you what the three-dimensional nature of an object would be,” she added. “Not just touch, not cold or hot, but mental perception of depth.”

The chips are harmless inside Copeland’s brain, Gaunt said, and there’s not much concern about their long-term viability.

The main health risk comes from potential infection of the connections coming out of his scalp. “Clearly, getting rid of these connectors and making these devices fully wireless is an essential step,” he said.

Gaunt could not say how much it might cost to wire up future patients in this way. “Right now this is quite an expensive undertaking,” he said. “However, there are a lot of people motivated to make this accessible for patients.”

Gaunt also couldn’t venture a guess how long it would take for this technology to reach the marketplace, since it needs to be tested in many more patients.

However, Singh predicts that such touch technology might be implemented in prosthetics in less than a decade.

This research is funded primarily by the Revolutionizing Prosthetics program of the Defense Advanced Research Projects Agency, with additional support from the National Science Foundation. The new report was published in the Oct. 13 issue of Science Translational Medicine.