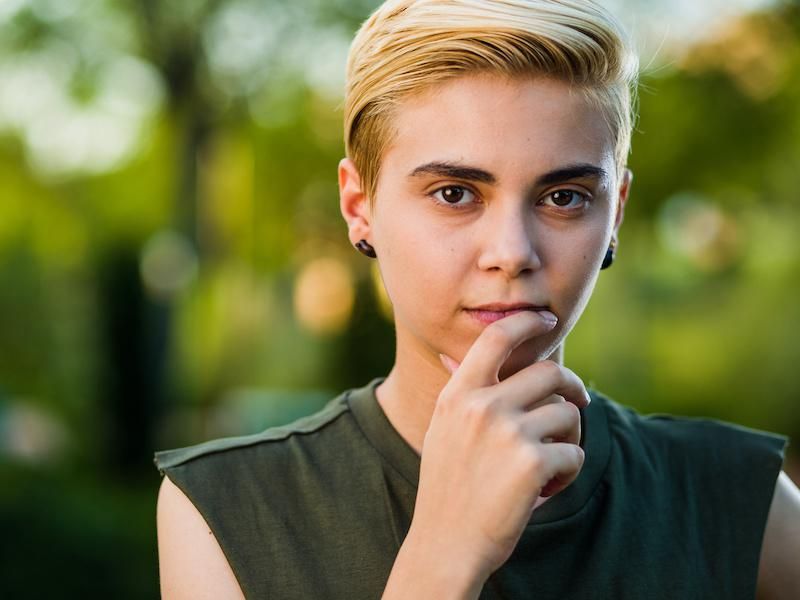 Teens may be much more diverse in their gender identities than widely thought, a new study suggests.

In a survey of nearly 3,200 high school students in one U.S. school district, researchers found that almost 10% were “gender-diverse.” That meant they identified as a gender other than the sex on their birth certificate.

Often, those kids identified as transgender, but many considered themselves nonbinary — neither male nor female.

Researchers said the 10% figure is far higher than past estimates. A widely cited statistic comes from a 2017 government survey of U.S. high school students, in which 1.8% said they were transgender.

That survey only asked kids whether they identified as transgender, specifically, said Dr. Kacie Kidd, lead researcher on the new study.

And more than 9% chose one or more options that did not align with their birth sex.

That figure is likely closer to the truth than the 2017 survey, said Kidd, a fellow at UPMC Children’s Hospital of Pittsburgh.

“This study was much more inclusive,” she said. “Not all kids who are gender-diverse identify as transgender.”

Of all students who were gender-diverse, roughly 39% identified as trans feminine, while 30% were trans masculine. Another 31% said they were nonbinary.

The survey revealed another pattern, too: Gender diversity was more common among teenagers who were not white.

The prevalence was just over 14% among Hispanic teens, and 10% among Black students. That compared with 7% of their white peers.

What’s striking about that, Kidd said, is that the demographics are much different at the region’s pediatric gender clinic. There, the large majority of kids are white.

The clinic offers what doctors call gender-affirming care. That includes services like hormone-blocking therapy that puts a “pause” on puberty for kids who are transgender or gender-questioning, as well as mental health counseling for those dealing with conditions like depression or anxiety.

The new findings, Kidd said, suggest that many minority kids are not getting gender-affirming care — despite the fact that they are particularly vulnerable.

It’s known that Black and Hispanic transgender women are at especially high risk for violence, poverty, depression and suicidal thoughts.

It’s easy to see why, according to Dr. Michelle Forcier, director of gender, sex and reproductive justice programming at Open Door Health in Providence, R.I.

Those women, she said, are at an intersection of transphobia, misogyny and racism.

“Every day there are the questions,” Forcier said. “Will I be outed? Will I be assaulted, verbally or physically — in my own home or outside of home? Add to that the experience of racism.”

Forcier wrote an editorial published with the findings May 18 in the journal Pediatrics. She agreed that the new numbers are likely a better reflection of reality.

“It’s good to have confirmation that, yes, of course, more than 2% of kids are gender-diverse,” Forcier said.

That said, the study focused on one urban school district in the Northeast. Additional studies should assess other regions, Kidd said. One reason that’s important, she added, is to better allocate health care resources.

Those resources, though, are now under threat, both Kidd and Forcier pointed out.

In April, Arkansas became the first U.S. state to ban doctors from providing gender-affirming care to minors. Similar bills have been introduced in many other states.

The current findings, Kidd said, hint at how many kids could be harmed by such legislation.

“There’s a whole lot of kids out there who need help, and we need to do more to support them,” she said. “That’s not happening in our current political climate.”

The American Academy of Pediatrics has come out against the recent legislation, saying that kids’ access to gender-affirming care can be lifesaving.

A 2020 study of transgender adults found that those who’d had early access to puberty-suppressing therapy were 70% less likely to have ever contemplated suicide, compared to those who’d wanted but not received the therapy.

Forcier said parents can do their part, too.

“You don’t necessarily need to have gender-reveal parties and lock your kids into a pink or blue identity,” she noted.

And in general, Forcier said, kids will do better if they know they have their parents’ support and can talk to them about anything.

The American Academy of Pediatrics has more on gender diversity.