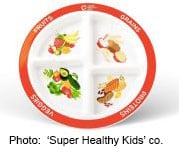 Parents often struggle to get their kids to eat more vegetables. But could something as simple as a picture of broccoli on a plate get children to load up on the healthy stuff?

Probably, at least for preschoolers, a new study reports.

When the kids were served lunch on a plate divided into four sections — one each for protein, grains, fruits and vegetables — with pictures of each type of food printed in the section, the youngsters ate more vegetables than they had previously.

“A plate won’t suddenly change your kid’s eating habits dramatically, but this is one tool to encourage healthy eating,” said study author Emily Melnick. She’s a doctoral student at the University of Colorado, Denver.

Melnick said a past study found that when pictures of vegetables were placed on school lunch trays in an elementary school, kids ate more veggies. That study piqued her curiosity and led to the current study in preschoolers, she said.

Her research included 235 youngsters from 18 different classrooms at a preschool in Arvada, Colo. Their average age was almost 4.

The study was done in two parts, and the menu was the same for both. In one part, the kids ate their lunches on white plates as they normally did. However, the researchers weighed and measured their food after they served themselves and then again after they finished eating, to see how much had been eaten.

During the second half of the experiment, the segmented picture plates were introduced and the kids were told that each section was meant for the food in the picture. Again, foods were measured before and after they were put on the plate.

The researchers noted that the kids also dished out and ate slightly more fruits, but the findings weren’t statistically significant.

“Kids were already serving themselves fruits and eating fruits [before we introduced the plates]. Fruits are more palatable to little kids,” Melnick explained.

“Kids are visual learners, so anything like this that can use visuals to help give them good dietary habits in childhood may affect lifelong eating habits in a positive way,” he said.

Both experts said it’s possible that the novelty of the plates may wear off. But Richel noted, “I think in this age group, by the time the novelty wears off, the habits may already be there, and the hope is that those good habits would be ingrained.”

The plates used in the study are commercially available. Melnick said the researchers purchased them through the internet, and they’re based on the U.S. government’s MyPlate.gov dietary plan.

Melnick added that the teachers also told her that using the plates gave them a good jumping off point to talk about nutrition.

The study was published Aug. 6 in the journal JAMA Pediatrics.

Read more about getting kids to eat more fruits and vegetables from the American Academy of Pediatrics.